Why Small Businesses Succeed on Main Street in Grapevine, Texas 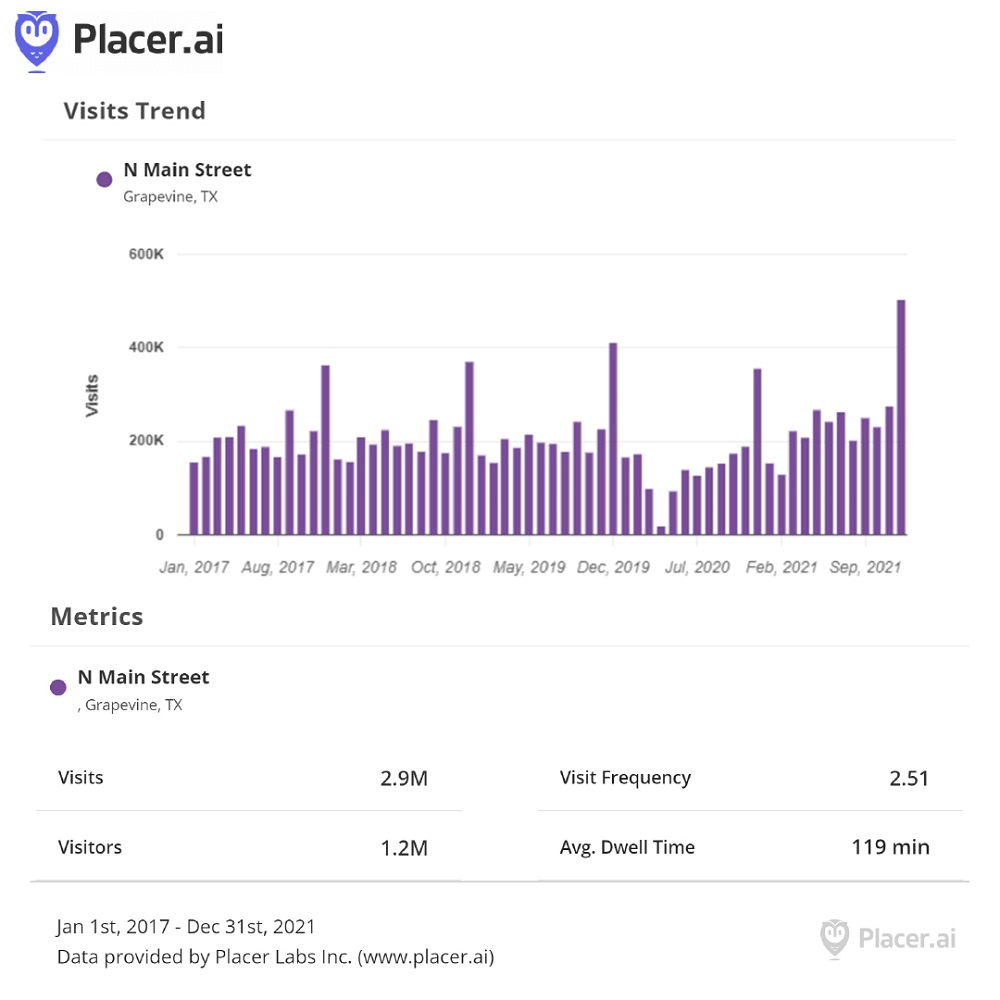 Now is an excellent time to spotlight small business success in Grapevine, Texas. For one, the U.S. Small Business Administration promotes National Small Business Week to recognize the critical contributions of America’s entrepreneurs and small business owners. In Grapevine, visitors and foot traffic are ramping up for the summertime boom that echoes and often surpasses the “spring break” surge seen at the end of March. Main Street Fest, held annually during the third weekend in May, brings in thousands of visitors to kick off this upward retail trend that delivers increased profits and sales tax revenue.

Comparing May 2021 to May 2017, Placer.ai data shows there has been a 25 percent increase in foot traffic to North Main Street. All told, the retail district has seen over 1.2 million unique visitors with 2.9 million visits over those 5 years. Main Street retailers saw 275,000 visits in May 2021 alone.

Dan Weinberger, owner and operator of Weinberg’s Deli  — “The Best Chicago Deli in Texas”  — described how Grapevine retail has expanded since he opened his restaurant on Main Street in 2002. 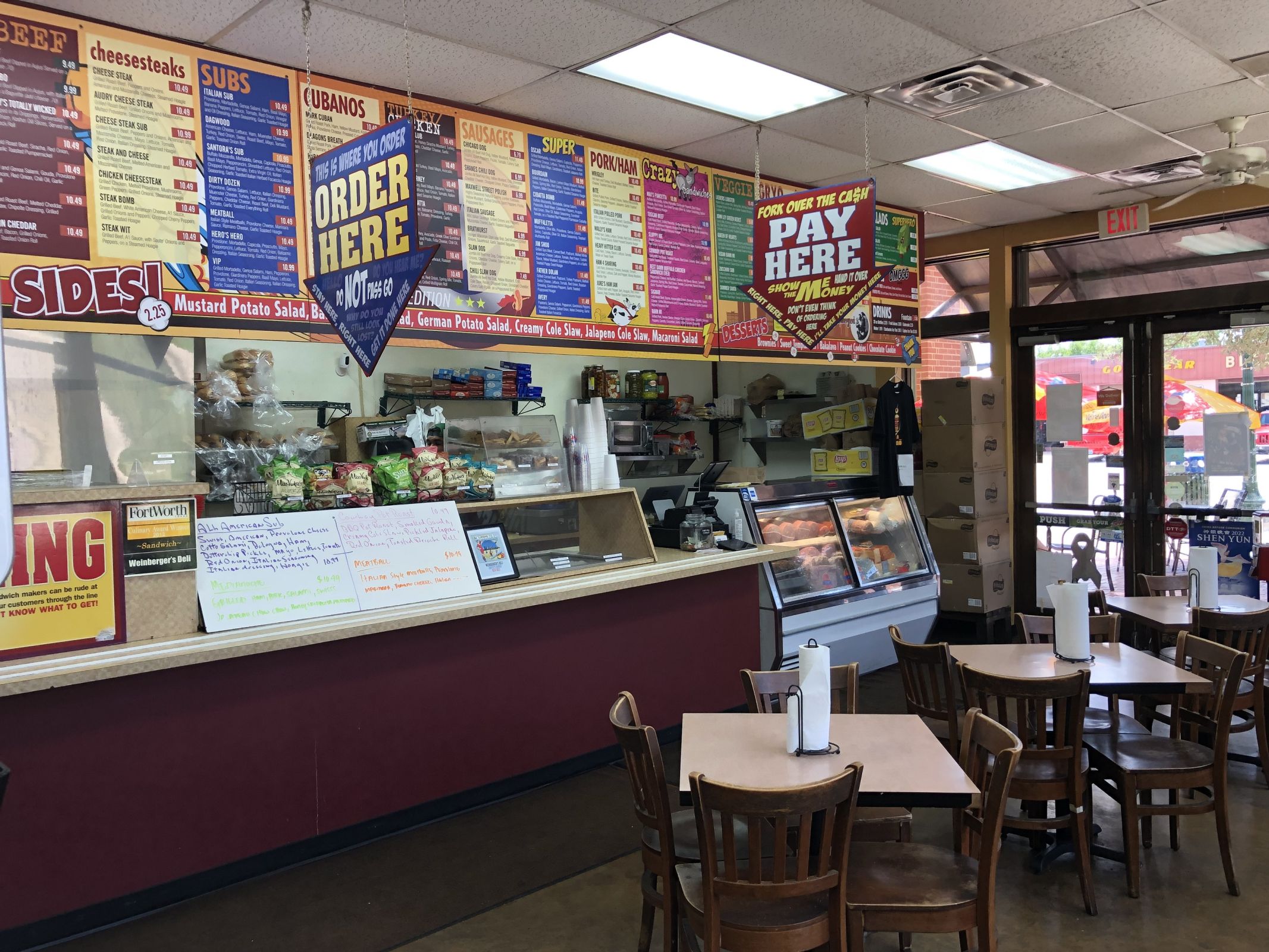 “Over the years, as the City grew and brought more and more visitors, so did my shop. I could have played a nine-inning baseball game on a Saturday afternoon outside my shop back in 2002. Today we have traffic at all hours, day and night. I have come to love this city and am one of the merchants that 'gets it.' This city has a wheel of money. The City encourages our convention and visitors bureau to promote. That brings in the people who spend money in the shops. That supplies the city with tax revenue that funds the CVB. And the wheel goes round and round.”

“Since I have been here, I have seen the Gaylord, Great Wolf Lodge, The CVB Building, The Vin, the train station, the train, and all of our festivals come about. I literally went from the end of Main Street to midtown. Wow, seems like a blink of an eye.”

Calling Weinberger’s Deli a “Chicago deli” is not just lip service. The family’s sandwich shops were founded in 1952 in Chicago by Weinberger’s father. The brand, which ultimately expanded to five stores, enjoyed over 50 years in Chicago before calling Grapevine home.

“Success for my shop was not overnight,” said Weinberger. “It took a while to catch on back then. My model was much different, more of a classic deli. The one aspect of the business people really embraced was the sandwiches I would make. So I went with my strong suit. No one in Grapevine knew who I was, so I decided to name sandwiches after locals. That was the beginning of the Wall of Sandwiches. Who would not want to say, ‘Have you been to the new deli? I 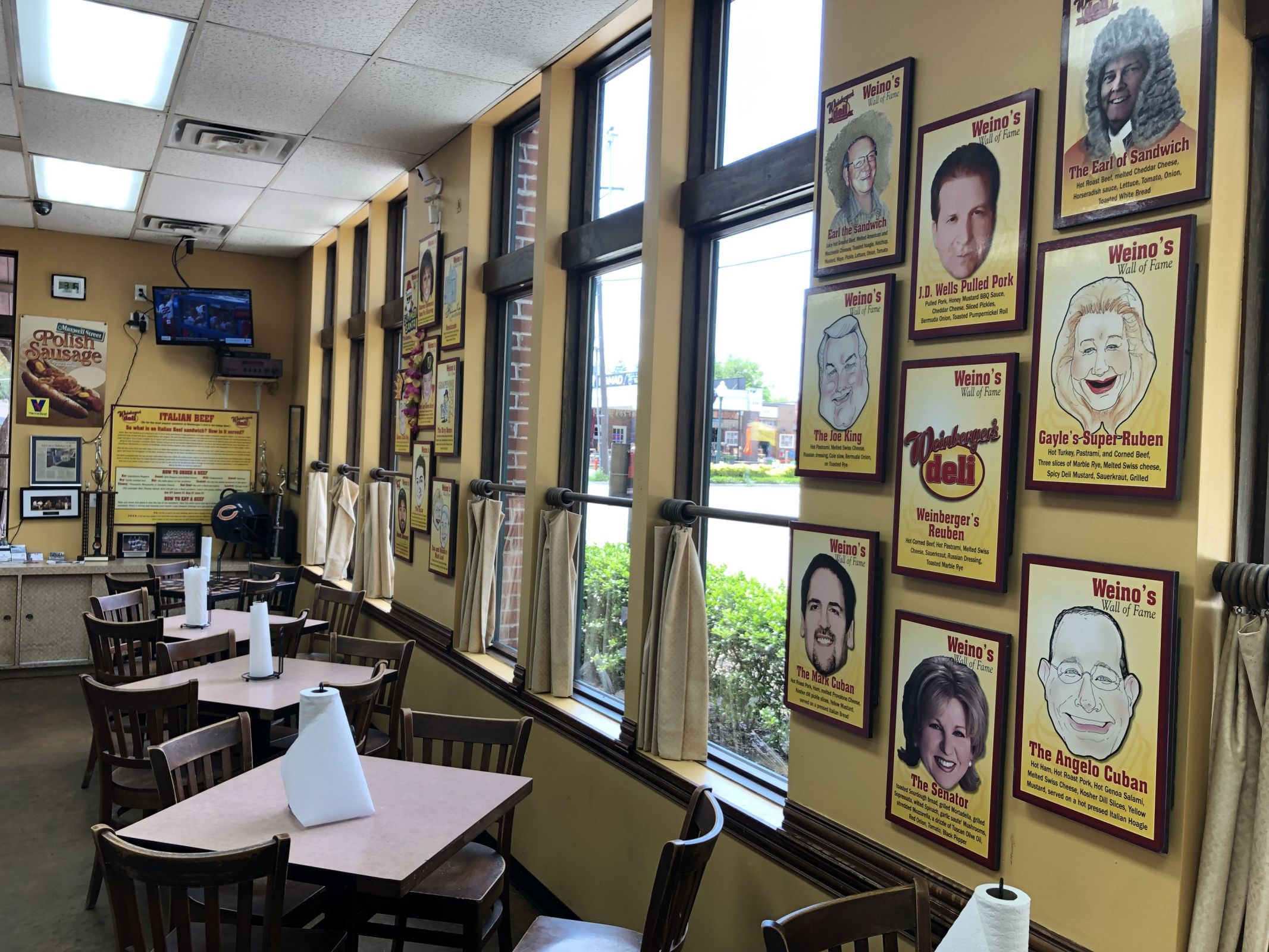 have a sandwich down there with my name on it; you should try it.’ It worked well. They all became my marketing team.”

There’s a lot on the menu to sink your teeth into. The Weinberger’s Deli's top five sandwiches are Weinberger Reuben, Italian Beef, The Mark CUBAN, Cheesesteak, and Italian Sub. Still, Weinberger prides himself on being able to create any sandwich his customers request. “I would have people come in and say, ‘Oh back in ‘wherever,’ I used to get this sandwich . . .’ Well, I could find that sandwich on the internet and replicate it. It helps that I am also a chef, and sandwiches happen to be my specialty. I'm also a sandwich historian, so not only can I make the sandwich, I can tell you why it is made the way it is.”

“I have become what I always wanted, iconic to Main Street,” said Weinberger. “My shop is listed in the ‘best’ of almost every publication in the metroplex. I have three times been mentioned on the internet as the Best Deli in Texas (Eat This Not That, MSN, and Smart News).”

“So, all that being said, what is the best part of being on Main Street? I grew up in the City. My neighbors are my family: my brothers and sisters in commerce. I am always sad when one leaves but rejoice at the new shops that come in. It took a century-old pandemic to get a few merchants to close, but the shops were filled in a minute with new. How great is that? When the nation's economy suffers through an economic downturn, we on Main Street continue to thrive.”

In addition to delicious restaurants, Grapevine is also all about entertainment. Grapevine Escape, owned and operated by Amber and Russell Sebastian, is located on Main Street, less than a mile from Hotel Vin and the Main Street TEXRail train station. 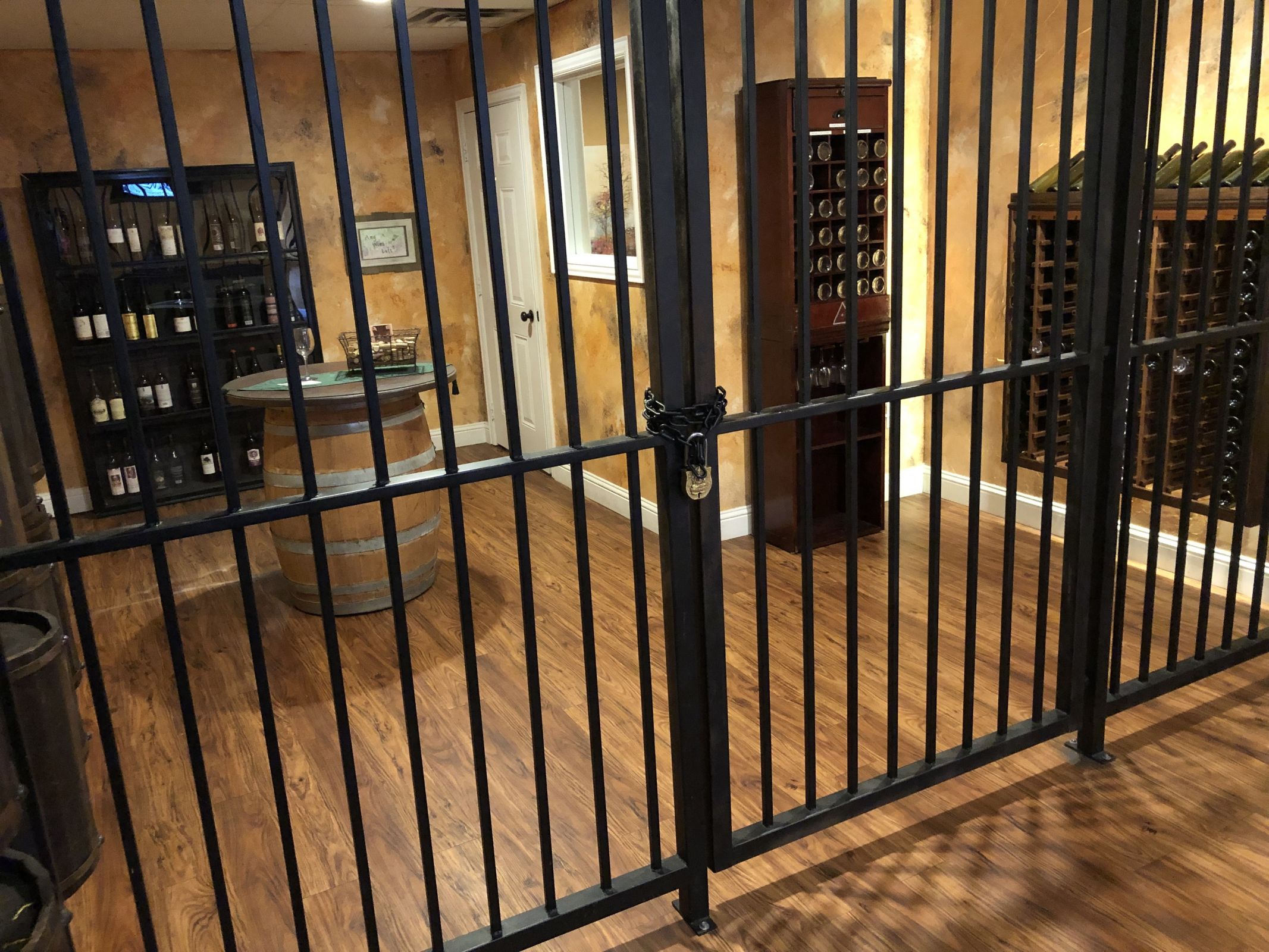 “We have three unique themed escape rooms at Grapevine Escape: The Wine Vault, Going to the Chapel, and FocusTec Labs,” said Russell. “We chose the themes of these rooms with the City of Grapevine in mind. In order to create these themes, we incorporated many design ideas and puzzles from people within our Grapevine community. In addition, we utilize both family members and the local community as the talent in our escape rooms.”

“Amber and I were born and raised in Fort Worth, and both have a passion for community theater,’ said Russell. “Back in 2004, we started volunteering and performing at Runway Theatre in Grapevine. Falling in love with the City is easy to do, and we moved to Grapevine in 2010 to be closer to Runway Theatre and our friends. When we had an opportunity to open an escape room to enhance entertainment options in our favorite city, we jumped at the chance. It has been an exciting seven years, and we are still growing!” 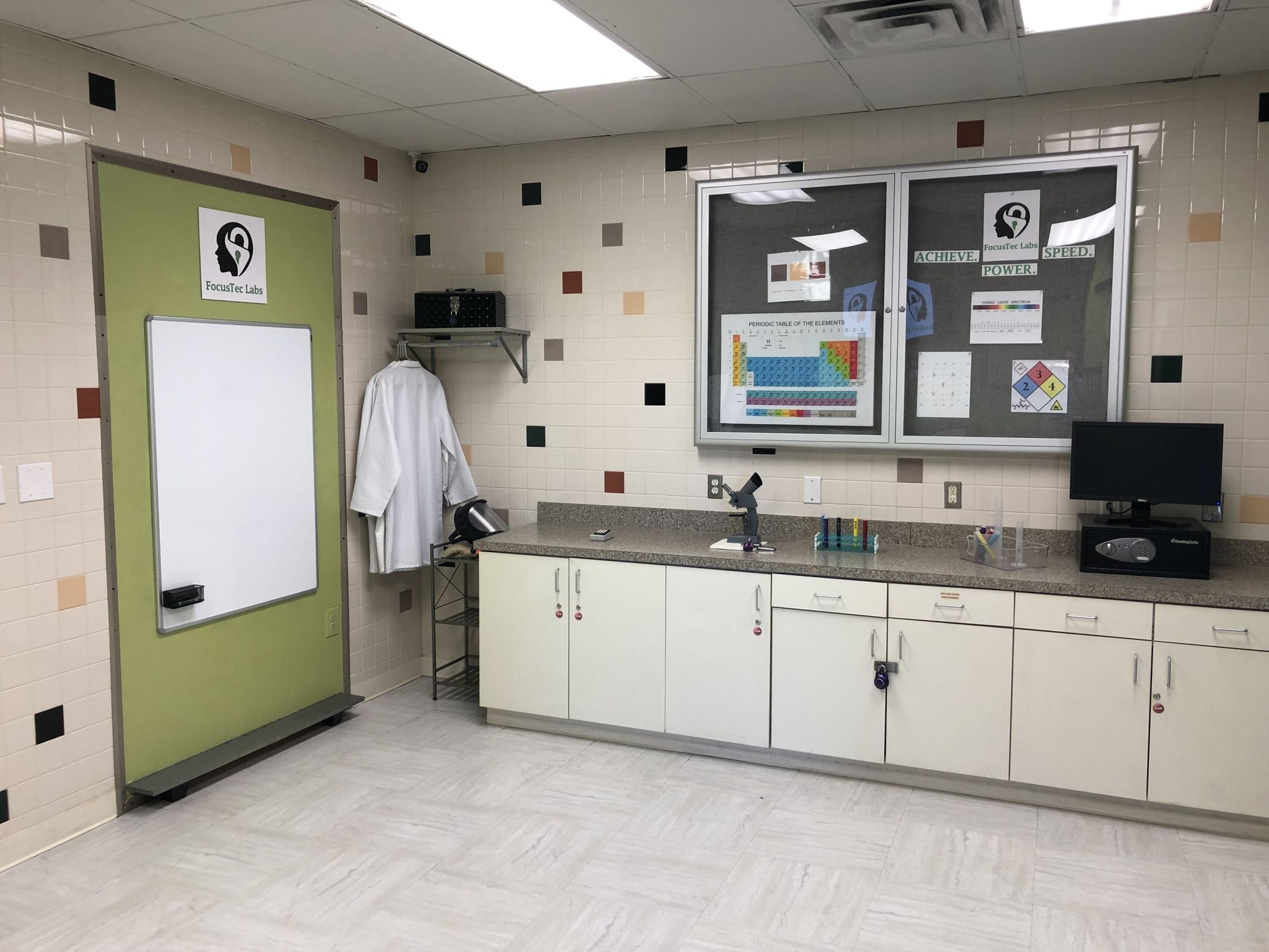 Their hard work is paying off. In 2020, Grapevine Escape was named one of the Top 100 Escape Rooms in the USA, and in 2021, it was nominated for a global award — the Top Escape Room Project Enthusiasts Choice Award (TERPECA).

“The City of Grapevine is our family,” said Russell. “We love the feel of friendship and partnership we have with every business here. Though it can be a challenge to run a small business, the support and kindness we have received make it all worth the while. We love building puzzles and sharing them with our customers, and we are passionate about providing the best entertainment experience for everyone who visits us!”

Check out The Growing Grapevine podcast! Find it on your favorite podcast apps such as Apple Podcast, Stitcher, Spotify, and Amazon Music. You can also check out the latest episode here.

Jun 8 2022
(The Center Square) – A second event in a new Small Business Series will take place Thursday in Fort Worth, Texas. The series, hosted by the state Economic Development and Tourism Office, the Fort Worth Hispanic Chamber of Commerce, and the Texas Workforce Commission, connects small business owners and aspiring entrepreneur...Continue Reading

Workforce Development To Get The Job Done

Jun 8 2022
Workforce issues are nothing new. The struggle to attract and retain employees is as old as companies themselves. However, as anyone who owns a business can attest, the magnitude of today’s workforce challenges is unprecedented. So many companies are grappling to find the right workers, but many come up short...Continue Reading

Jun 6 2022
Communities throughout the country are facing a housing crisis either due to a lack of housing units, as the result of prices skyrocketing past the level of affordability, or both. Solving this crisis requires creativity and the support of the entire community. As such, leaders who put forth policies withou...Continue Reading