It Ain't Easy Being the Christmas Capital of Texas 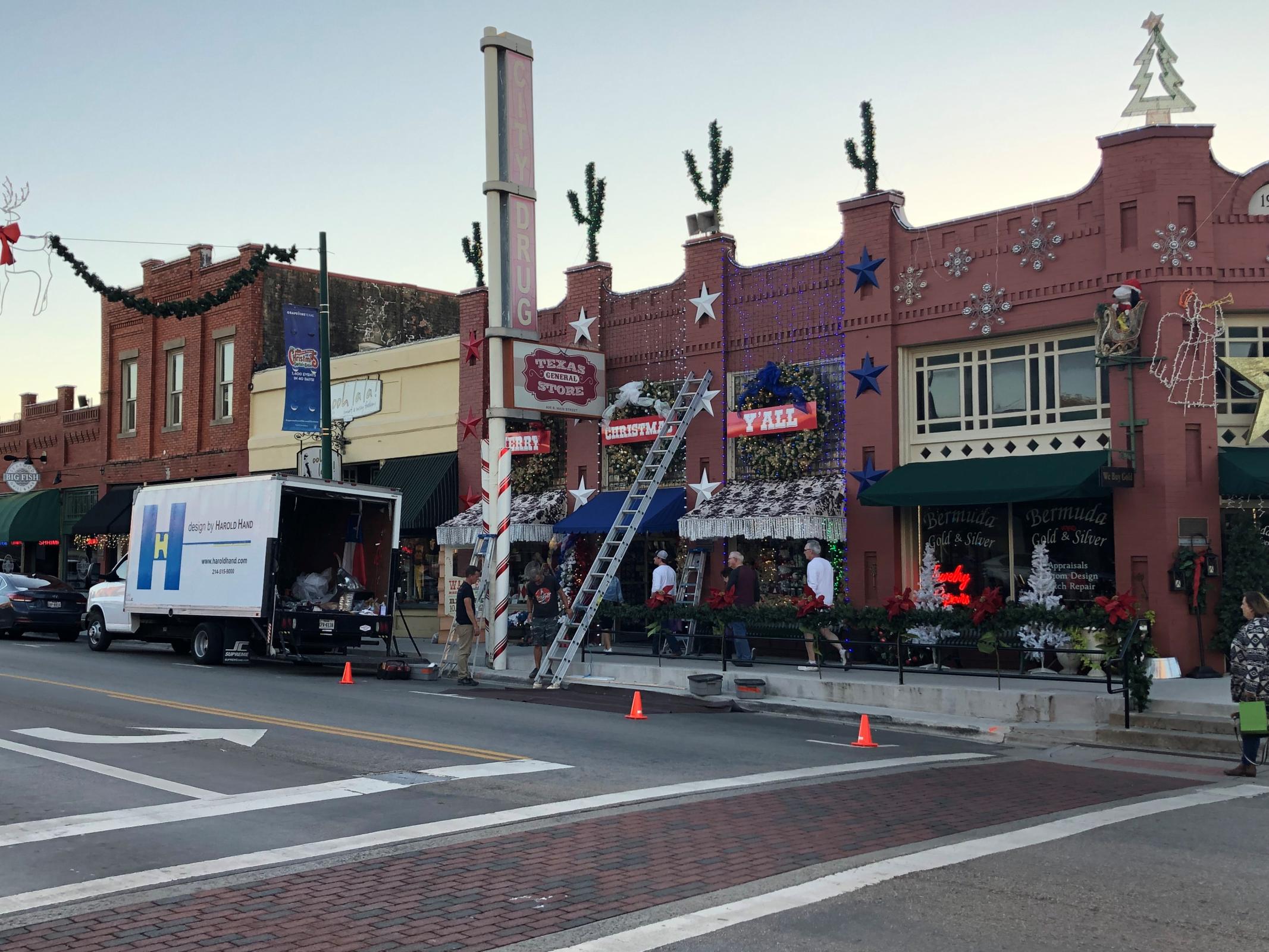 For over a decade now, the City of Grapevine has been the Official "Christmas Capital of Texas." If you’re wondering what that means, it’s best to start with the Carol of Lights: an annual celebration emceed by none other than Mrs. Claus herself.

Every year, on the Monday before Thanksgiving, the city’s historic Main Street overflows with families and tourists ready to ring in the holiday season. Local high schools lend their drill teams for the proceedings, and – this year, at least – acapella ensemble Eclipse 6 threw themselves into a series of Broadway parodies featuring Frosty the Greatest Snowman and a version of Hamilton re-written to feature Rudolph the Red-nosed Reindeer.

There’s a video, too, synced to fireworks, and a light show that plays out in thousands of bulbs strewn across the face of City Hall. The whole of Main Street turns into a forty-day spectacle, featuring hundreds of yards of decorations, some the size of a grown man. There’s a magic to it that draws a person in; overwhelms the senses with joy that pushes out every thought but Christmas. In 2021, an estimated 13,773 people packed into the streets around City Hall for the hour-long show.

But that kind of wonder isn’t easy to produce.

Meet the Elves of Main Street 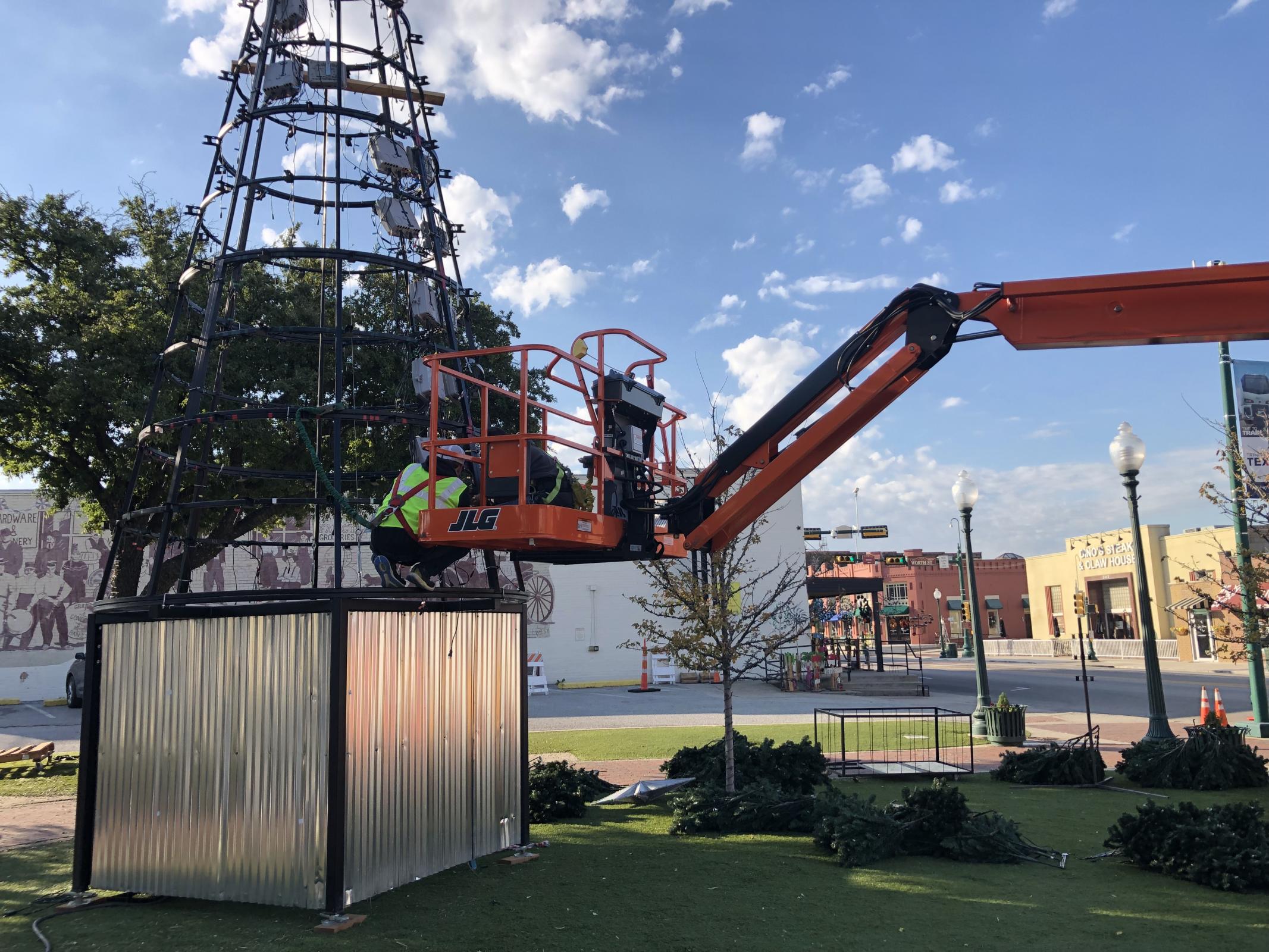 40 Days of Christmas here in Grapevine starts with a full month of physical setup, handled by a team of three or four “elves” from the Parks and Recreation Department. Who, by the way, spend most of their year repairing irrigation systems and building out equipment for a Parks Department that oversees over 1,600 acres of property.

“Christmas is always there. It never goes away,” says Parks Manager Tony Steele. “There are basically three or four guys whose job it is to do Christmas. They’re actually irrigators, as well... we’re a little insane, I’m not going to lie. There are things that we’ll dream up, and there’s not a lot of ‘no’s.’ It’s ‘how can we get there?’ It’s Disney. We shoot for Disney.”

Before any Christmas magic can take place on Main Street, Tony’s team has to make a little bit of noise. This year, they turned the picturesque gazebo at the center of the city into an open Toy Box featuring life-sized versions of your favorite childhood games: big, red Barrel-o-Monkeys swing from the ornate trimming, marking the edge of a giant photo op for travelers looking to Instagram themselves from the heart of Santa’s living room. There are hand-crafted wooden trains big enough for kids to play in, a game of operation so large it takes two hands to work the tweezers, plus a couple of dinosaurs that tower over the children at their feet. And, off to the side, a thirty-foot Christmas tree that takes three days to assemble.

Ok, let’s pause a minute for perspective. It takes something like 70,000 employees to run Disneyland year-round. Rough estimates for operating costs at a Disney Park clock in around five and a half million dollars. Per day. That’s about 12% of the city’s annual operating budget. Being the Christmas Capital of Texas isn’t quite that important. But we’re talking about a vibe here; about a team of three or four core people and a couple dozen part-time elves and contractors who have to plan for everything from Mother Nature to overenthusiastic toddlers in their quest to bring Christmas to life on Main Street. 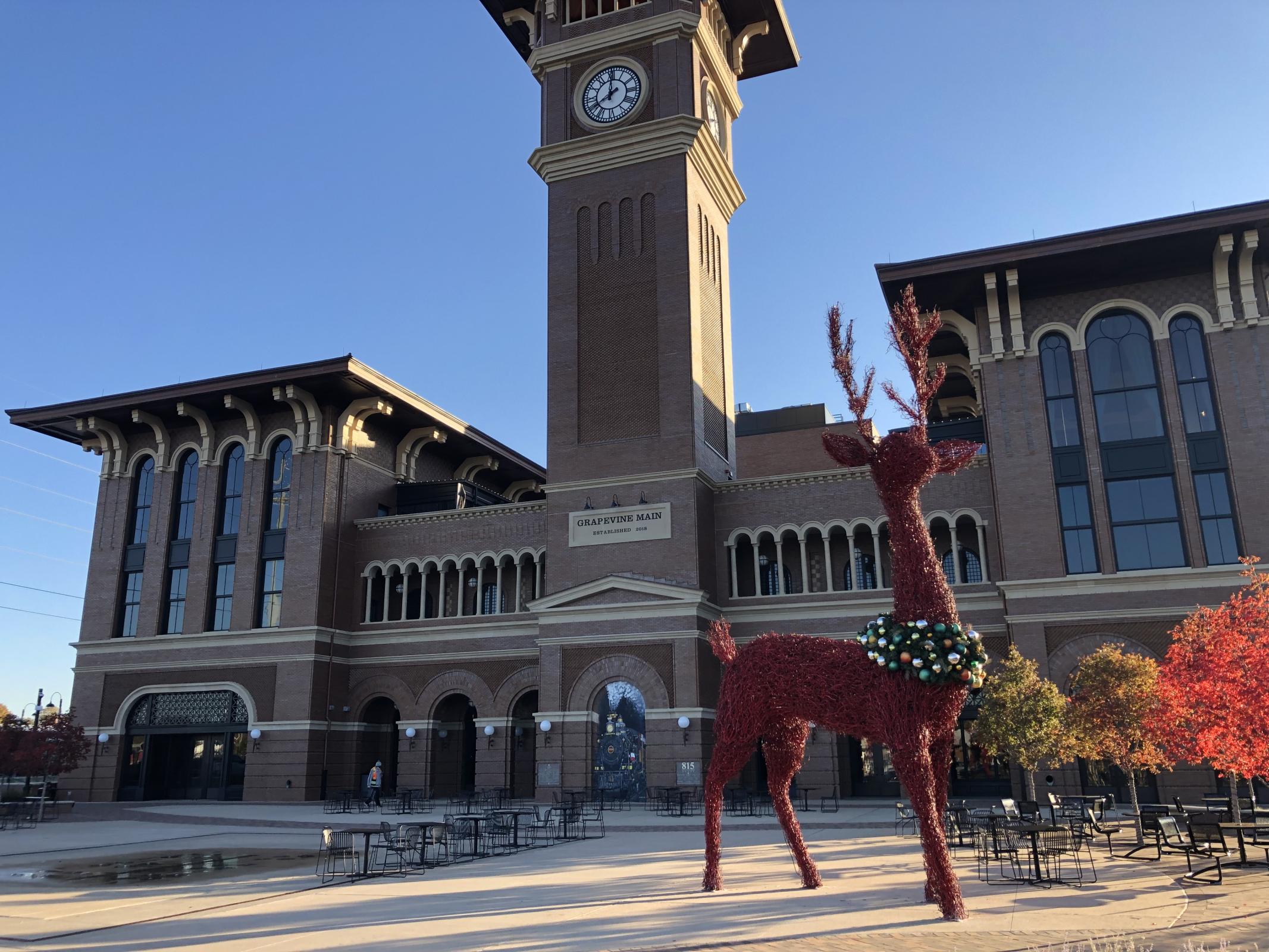 “The minute we put up our first Christmas decoration, you can count on about a 50 mile-per-hour cold front coming through. I can’t tell you how many things have blown off of poles. One of our trees completely folded on itself because the wind was so bad. We had one of our big red reindeer just blow right over last year, and it’s got a stand. It folded the metal stand, like a taco! The weather just takes its toll on these things,” Steele said.

“We learned that it’s kind of a playground out there, as well. These kids just love running around and doing stuff. That came into play when we switched [the theme] this year. We need to account for open space playtime... give the kids something to climb on, to play in; and the parents something to take their picture with. That’s really the key, is kind of partitioning it out… and then you see how it’s used, and you adjust.”

That’s the Grapevine spirit in a nutshell: accept the obstacles as opportunities for growth; learn from the past, recognize what people really want, and move forward; make every year the best one yet. Seriously. Before this year’s decorations have even been hauled away to storage, Tony and his team will be dreaming about next Christmas. They’ll spend all summer fabricating decorations and making repairs – without missing a beat on their regular Parks assignments – and do it all over again next Thanksgiving.

Christmas might fade into the background, but it never really goes away. 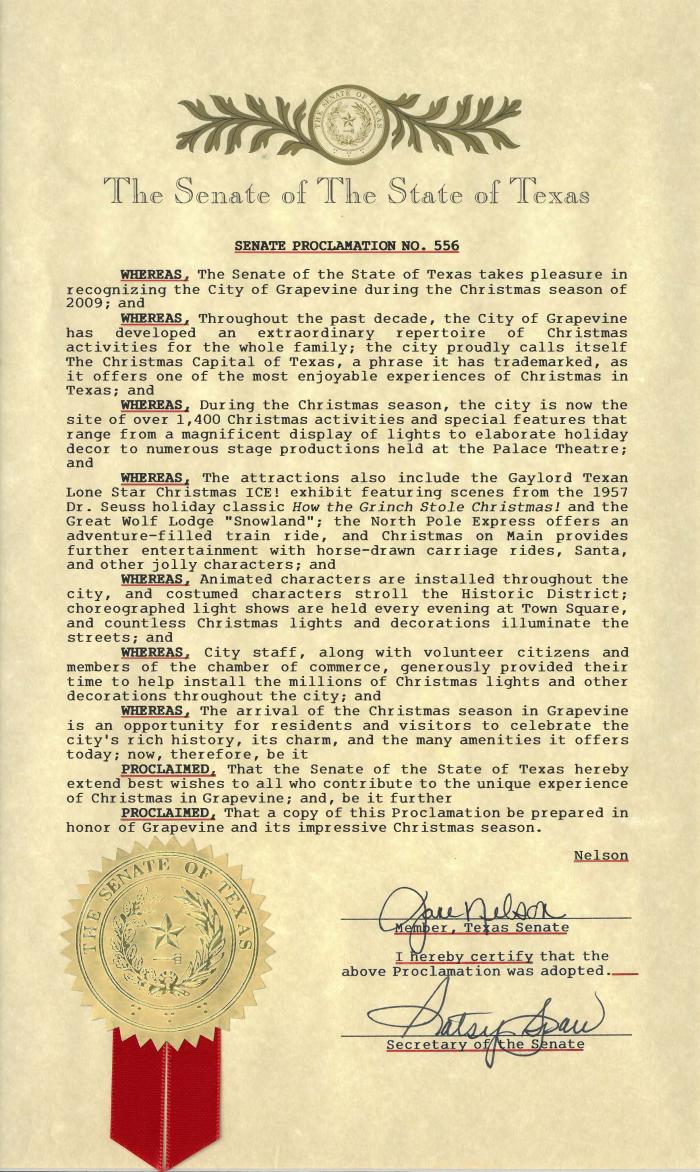 Back in the 1990s, believe it or not, December and January were slow months for Grapevine hotels. Leaning into Christmas was part of a broad strategy to fill those rooms and propel the City into a new era of success.

“Grapevine has always been excited about Christmas, right? Even when it was a couple of thousand people. So we start to really increase focus on Christmas, and then I sort of looked around and thought ‘you know, nobody’s really doing anything with Christmas in Texas. Anywhere. So I thought, ‘let’s just anoint ourselves the Christmas Capital of Texas.’ And we did, and no one said anything,” said P.W. McCallum, Director of the City’s Convention and Visitors Bureau.

As the slate of Christmas attractions grew, McCallum moved to finalize the city’s claim on the Christmas Capital title by trademarking the term and petitioning the Texas legislature for official recognition. Together, he and Councilwoman Sharon Rogers put together a pitch for a special committee of the Texas Senate. With a little help from Senator Jane Nelson, Grapevine was unanimously approved as the state’s Christmas Capital in 2009. While it was mostly the decorations and events that sealed the deal, Rogers jokes that “Mrs. Claus and Santa’s Brother” helped by making a plainclothes appearance for the initial presentation.

Rogers plays Mrs. Claus in the Carol of Lights every year, and McCallum sports a notable white beard.

Is it worth the work?

You’re probably wondering why the City goes to such great lengths to hold on to the Christmas Capital title. In fact, you may be wondering why it was worth becoming the Christmas Capital of Texas in the first place, much less paying for the trademark. The short answer is that it boosts the unique tax structure of a city dedicated to serving the interests of its residents.

“What the Tourism does, and the visitation at Christmas time, is help us keep our property taxes low. Because the more sales tax we get, the lower we can make our property taxes. We have the second lowest property tax rate in the entire state of Texas for a full-service City our size,” Rogers said.

Using foot traffic data from Placer.ai, we can confidently say that December is the busiest month in Grapevine. North Main Street, the half-mile stretch where Tony and his crew shed sweat and tears to bring Christmas to life, receives around 400,000 visitors in the average holiday season. That’s about twice as many visitors as the average month. Last year, in the middle of a global pandemic, that number barely changed: 353,619.

To be clear, those aren’t people driving through. Placer only counts visits of 15 minutes or more, and the average dwell time on Main Street is 109 minutes. Plenty of time to snap your photos, pop into a few stores, and maybe even grab a drink or a bite to eat. The same pattern holds true in the Entertainment District, home of several premier hotels and Grapevine Mills Mall. Together, those visits drive the city’s single biggest month for sales tax revenue.

“From a commerce perspective – and from a general retail perspective – one of the most significant keys to success is a high density of your population. And we pack people into Grapevine during the month of Christmas,” said Grapevine CFO Greg Jordan.

Christmas is the biggest month of the year in Grapevine, part of a reliable sales tax cycle that helps keep property taxes – and therefore the cost of living and doing business – low. That’s not a trend unique to Grapevine, of course. Most companies, especially retailers and consumer services, make their strongest earnings at the tail end of the year. It’s built into the Holiday season. But isn’t that part of the genius of being the Christmas Capital of Texas? Making the market trends work for you?

At the end of the day, success is always hard work. But, as Teddy Roosevelt once observed, “far and away the best prize that life has to offer is the chance to work hard at work worth doing.”

And here in the Christmas Capital, we’re pretty confident we have that down.

Dec 21 2021
As the U.S. economy continues its recovery from the impacts of the COVID-19 pandemic, employers are encountering an increasingly difficult talent landscape fraught with challenges related to the attraction and retention of the talent upon which their business relies. This is particularly true for the most advanced technical job roles...Continue Reading

Creating a Work Environment For Employee Growth and Development

Dec 8 2021
In August, Rocki Rockingham was named Chief Human Resources Officer for GE Appliances. Area Development’s editor recently asked her about the company’s strategy to build upon its recent global “Great Place to Work” recognition and to create a workplace culture that attracts and retains top talent. Area Development: Despite the hig...Continue Reading

Dec 7 2021
Once a week, North Richland Hills resident Stacia Curry hops onboard TEXRail—Trinity Metro’s commuter train—to head to Grapevine to visit her daughter and explore the city’s historic downtown. Curry said the main reasons she opts for the train over her car is “it’s cheap, and it’s less stressful.” “[The ride] makes i...Continue Reading